This world health day the focus revolves around the measures need to be taken for diabetes prevention across the world.Diabetes has affected approx. 12.3 % population in US and is a big c

This world health day the focus revolves around the measures need to be taken for diabetes prevention across the world.Diabetes has affected approx. 12.3 % population in US and is a big challange for coming years. 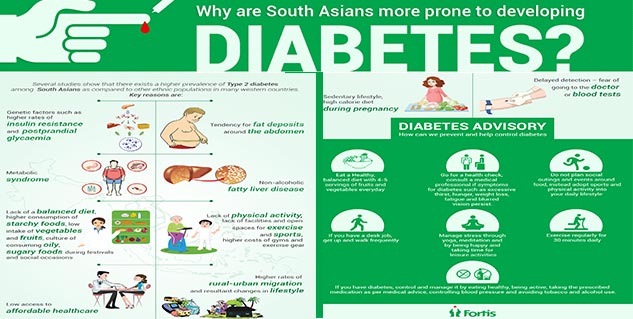 •         Overweight is the highest risk factor for diabetes in India, affecting 21.4% population (19 % males and 23.9% females). Key factors are very high consumption of sugars and fats among affluent populations. Further due to increasing urbanization and mechanization, urbans Indians have a sedentary lifestyles with physical activity given low priority.

What is Diabetes? What are its symptoms?

•         Diabetes is a chronic condition caused when the pancreas produces insufficient quantities of the hormone insulin, or when our body cannot effectively utilize the insulin it produces. Insulin is the hormone in our bodies that regulates blood sugar.

•         Type 1 Diabetes is a condition where the body has deficient insulin production and requires daily doses of insulin. Why Type 1 diabetes occurs is not known and it is not preventable as on date. The main symptoms include frequent passage of urine, excessive thirst, constant pangs of hunger, unexplained weight loss, changes in vision and tiredness.

•         Type 2 Diabetes is caused by the body’s ineffective use of insulin due to overweight and lack of physical activity. 90% of people with diabetes around the world have Type 2 diabetes.

•         Symptoms could be similar to Type 1 diabetes, but often latent or non-specific.  Lately, Type 2 diabetes is also increasing among children.

•         Impaired glucose tolerance (IGT) and impaired fasting glycaemia (IFG) are intermediate conditions between being normal and having diabetes. People with IGT or IFG are at high risk of progressing to type 2 diabetes.

Several studies show that there exists a higher prevalence of Type 2 diabetes among   South Asians as compared to other ethnic populations. Key /determinants are:

•         Tendency for fat deposits around the abdomen

•         At the individual level, lack of physical activity; at the socio-economic level, lack of community facilities and open spaces in urban areas for exercise and sports, costs of gyms     and exercise gear being beyond the means of the common citizens

Dr Anoop Misra, Chairman, Fortis C-DOC Hospital of Diabetes and Allied Sciences, says, “Indians suffer from an early onset of dysmetabolic state due to excess body fat, fatty liver and genetic predisposition. Proper diet and moderate physical activity should be part of the lifestyle consistently from early years to prevent diabetes. Once it develops, management must be followed in a vigorous and disciplined mode, and according to recently suggested India specific diabetes treatment algorithm. Finally, we should develop our own research agenda on diabetes, and not copy and paste from western based diktats, so as to benefit our population with unique diet and lifestyle charateristics ”

Diabetes Advisory – How can we prevent and help control diabetes?

•         Do not plan social outings and events around food, instead adopt sports and physical activity into your lifestyle

•         Go for a health check, consult a medical professional if symptoms such as excessive thirst, hunger, weight loss, fatigue and blurred vision persist. Routine blood sugar check should be done in all adults above 30 years of age.

•         If you have diabetes, control and manage it by eating healthy, being active, taking the prescribed medication as per medical advice, controlling blood pressure and avoiding tobacco and alcohol use.

•         Manage stress through yoga, meditation, by having a positive outlook and taking time for leisure activities

What are some of the new advancements in the research and treatment on diabetes?

•         Management of type 2 diabetes has been improved by recent introduction of several drugs including those acting via GLP-1 pathways and through kidney specific receptors. There are 5 more classes of drugs under development. Several new long acting insulins have been discovered.

•         A long term prevention programme including lifestyle measures and oral antihyperglycemic agents have shown up to 61% reduction in the development of type 2 diabetes in patients with prediabetes.

•         Oil and nutrient changes in diets of Indian population has been researched to show potential for prevention of diabetes and management of fatty liver.