What does the Black Burger really have?

"What does a black burger really have?" is a question most of us have. So, here we give you an insight into what this coal-black burger is all about really.

While walking out the exit of a plush mall the other day, I visually stumble upon the billboard with something in coal-black colour that simulated a burger and on closer look, it really was a burger, a big black burger. Although instantly grossed out, I was still eager to know what its components are and what it is that gives it the non-appetizing black colour. So, here I have gathered all that I could to enlighten you on this new junkie on the market because like me, I know there are a lot of similarly grossed out, eager souls out there. So, would you dare try it? 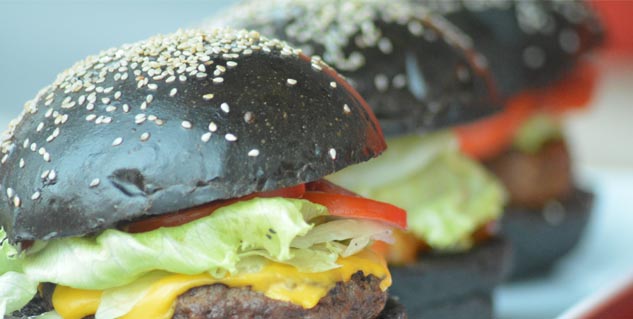 Going back in time

Burger Kings’s Japanese stores began selling black burgers in September, 2012 for a limited period of time before re-launching them in 2013 and then later in the year 2014, launching the Kuro range.  Kuro burgers basically swapped their orange-yellow buns and cheese for their pitch black varieties. These burgers came to be originally referred to as Kuro Diamond/Pearl burgers with the only difference between the two varieties being the presence of lettuce, onion and tomato in the latter.

How it has come to India

The first to launch black burgers in India are an SA-based fast-food chain, Barcelos. It has been estimated that the Burger King food chain in Delhi will follow suit.

What is it made of?

The Kuro Pearl is a black pepper beef patty that is covered with Chaliapin i.e. onion and soy sauce with squid ink. The black buns and cheese are colored with bamboo charcoal. The Kuro Diamond is similar to Kuro Pearl, but with more nutrition and fats in the form of tomatoes, lettuce, onions and mayonnaise.

The black burger sold in Barcelos, New Delhi, does not use charcoal to colour the buns black, and neither does it use beef, goat, lamb or buffalo for matters concerned with the law of the country. Buns are blackened using permitted food colours and the burger uses real chicken and not one that is breaded or minced.

If you are expecting the burger to taste superficially different because of its different colour, you will be disappointed.  Otherwise, the burger has a peppery taste to it and may strike your taste buds when you bite into your first bite of the burger. The Kuro Diamond will be juicier because of the extra mayonnaise and sauce compared with the Kuro Pearl.

As opposed to the peppery taste of Koru burgers, the Indian variant of black burger has a garlic-celery flavour which enhances the overall taste of the burger. Also, the use of real chicken has made the burger a popular dish in the restaurant.