Leprosy is a bacterial infection which causes severe disfiguring skin condition and nerve damage. If not treated on time leprosy can lead to severe health complications.

Leprosy is a bacterial infection which progresses slowly with time and damages the skin and the nervous system. The infection is caused by a bacterium called Mycobacterium leprae. If not treated on time leprosy can lead to severe health complications like disfigurement and significant disability. Over two lakh new leprosy cases are detected all over the world. India alone records more than half of the new cases detected every year.  The bacteria responsible for leprosy attacks macrophages, a key part of the immune system, and the Schwann cells that support cells for the nervous system. 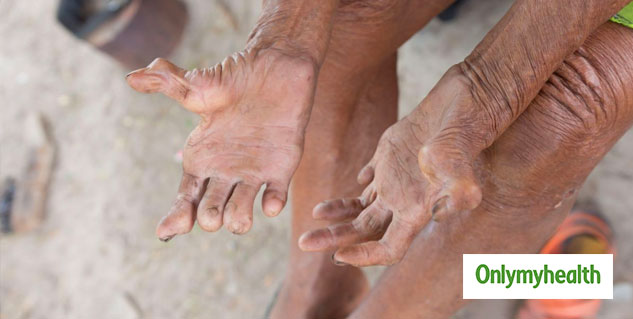 What are the symptoms of leprosy?

Leprosy affects the skin in its initial stage. Some of the symptoms which can be noticed easily may include:

What are the types of leprosy?

A person with this type of infection experiences a few lesions only. It is a mild form of the disease in which the immune system works well.

In this type, the skin, nerves and other organs of the patient get affected as well. This type spreads easily and the immune system of the person also becomes less responsive.

This type shows the symptoms of both tuberculoid and lepromatous leprosy.

How is leprosy diagnosed?

The doctor will conduct several tests and examinations. A physical exam is done to check the signs and symptoms. Later, a biopsy is done in which a small piece of the skin or the nerve is extracted and given for testing.

A lepromin skin test is also conducted to check the type of leprosy.

How is leprosy treated?

A combination of three drugs is given to the patient. Along with the three-drug combination therapy antibiotics are given to kill the bacteria that causes the disease. Anti-inflammatory medicines are also given such as aspirin, thalidomide. The treatment usually lasts up to 1 to 2 years.

A strong stigma revolves around leprosy. Due to the lack of awareness and knowledge, a person suffering from leprosy is usually avoided in society. But leprosy is not completely contagious. After the treatment for almost 2 to 4 weeks, the disease is no longer contagious at all. Leprosy patients are often removed from the society which makes their living difficult.

Also read: Gestational Diabetes: What to Avoid During Pregnancy

If leprosy is not treated on time, it can lead to some serious complications. Some of the complications may include:

How to prevent leprosy?

Early diagnosis and treatment of the condition is the best way to control leprosy. Proper awareness and education should be provided about leprosy. A person should also avoid close or long-term contact with an infected or untreated person.