Celebrities who pitched in for HIV/AIDS

Celebrities' link with humanitarian cause is not a never-heard story, but here are a few who have stood by the cause of AIDS.

Almost every Hollywood actor has a cause to tag along with. While some have stood up for the hungry and deprived, others have stood up for the environment. With the World AIDS Day around the corner, we have here a list of celebrities, who have stood by HIV/AIDS: a major health concern that has sparked a lot of compassion from the rich and the poor alike. 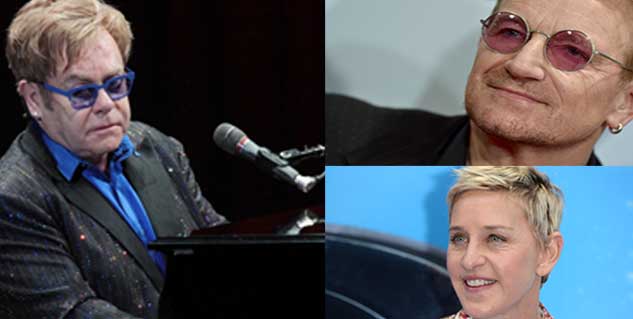 [Read: Symptoms of HIV and AIDS]

DeGenres has not only stood by the concern of AIDS emotionally but is also officially the new U.S. special envoy for Global AIDS awareness. With her efforts of gathering over 8 million of her twitter followers, she has set several steps ahead in building awareness about the lethal virus.

Keys has been storming to fight against HIV and AIDS since she was in her early twenties. In fact, the Grammy award winner co-founded an organization named “Keep a Child Alive”. Quite remarkable as it can be, she brought several million dollars to the aid of the patients. Her organisation, she says, is a means to turn the worst epidemic of the present generation into the greatest victory.

For all the stagecraft that Lady Gaga puts up in her music videos, it might seem unlikely for cynics to believe that she holds an important position as a fighter against HIV and AIDS. Gaga has been a major contributor to the HIV and AIDS awareness building efforts. In fact, she dressed herself in a wacky attire that appeared as if a latex condom to make her point clear on a National Television.

The famous Irish singer and rocker from the popular band U2, Bono, is not only known as a passionate artist but also a humanitarian. One of his most popular efforts has been the fight against ‘AIDS in Africa’ followed by a campaign to fight poverty.

[Read: How to prevent contracting HIV and AIDS]

A pioneer in the world of 0 and 1, Bill Gates has utilised a chunk of his fortune to aid the victims of HIV & AIDS and invested in building awareness about the same through the Bill & Melinda Gates Foundation.

Much before Lady Gaga swept the floor under a million people’s feet, there was Elton John who swayed every one in the crowd.  He had raised and spent over $220 million to fight AIDS. He has also opened an AIDS health facility in Ukraine.